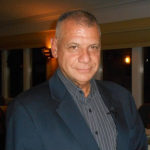 Is one of the leading academic activists in the United States. A highly skilled debater and dynamic public speaker, Tom frequently goes toe to toe with Muslim Brotherhood representatives exposing their radical agenda to the public and elected officials. Mr. Trento with earned degrees in Law Enforcement and Philosophy and Theology was awarded the The Carnegie Hero Medal Award for saving a man from a burning car.

Mr. Trento has traveled extensively throughout the US and Europe lecturing and exposing Islamic violence and infiltration in government, law enforcement and academic institutions. He is one of the co-authors of Shariah: The Threat To America and appears frequently on major media outlets and talk shows as an authority on Islamic ideology.