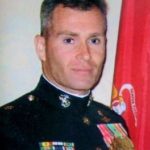 Fred Galvin joined the U.S. Marine Corps from northeast Kansas immediately after graduating high school at 17 years old in 1987. As a Corporal he served in a M-60 Tank Company assigned to Regimental Landing Team – 5 and conducted combat operations during Operation DESERT SHIELD/DESERT STORM.

Fred reentered the U.S. Marine Corps through the Officer Candidate Class program and was commissioned as a 2nd Lieutenant in 1995. He graduated from the Infantry Officer Course and served as an Infantry Platoon Commander in the 1st Marine Division where he deployed again to the Persian Gulf in 1998 with Battalion Landing Team 1/4.  He then was screened and selected for duty as a Force Reconnaissance Platoon Commander in Okinawa, Japan with 5th Force Reconnaissance where his Platoon conducted 16 multi-national exercises and two separate deployments aboard the USS ESSEX with the 31st Marine Expeditionary Unit.

In Dec 2002, Captain Galvin was screened and transferred to 1st Force Reconnaissance for duty as a Force Reconnaissance Platoon Commander where he conducted multiple combat operations including seizing 36 ships in the Northern Arabian Gulf, Gulf of Oman and Gulf of Aden in 2003-2004 and participating in over 40 reconnaissance missions and over 100 precision raids against high level insurgents in Iraq in 2003 and 2005.

In Feb 2006, Major Galvin was screened and selected to command the Marine Corps’ first Special Operations Task Force. In Jan 2007, Major Galvin commanded the Marine Corps’ first Special Operations Task Force overseas and conducted combat operations in Eastern Afghanistan. On 4 March 2007 while conducting combat operations Major Galvin and his team were ambushed by a suicide car bomb and violently attacked from a highly coordinated enemy force which his team precisely and effectively destroyed. On 24 May 2008, four months following a three and a half week courtroom trial, the Marine Central Command stated that Major Galvin’s Task Force, “acted appropriately and in accordance within the Rules of Engagement and the tactics, techniques and procedures for a complex ambush.”

In Dec 2009, Major Galvin transferred to Okinawa, Japan to serve as the Operations Officer with III Marine Expeditionary Force’s – Special Operations Training Group where he coordinated and conducted training and evaluations for the 31st Marine Expeditionary Unit and participated in several multi-national training exercises in the Pacific Rim. In Nov 2010, Major Galvin transferred to 3rd Reconnaissance Battalion for duty as the Operations Officer where he coordinated and participated in numerous exercises and operations including multi-national exercises in the Pacific Rim, Joint Special Operations Task Force – Philippines, and Operation ENDURING FREEDOM in Afghanistan.

In July 2012, Major Galvin transferred to Norfolk, Virginia for duty as the Commanding Officer of 1st Fleet Anti-Terrorism Security Team (1st FAST.) Following the 11 Sept 2012 attack on US personnel in Benghazi, Tripoli, 6th Platoon, 1st FAST deployed to Tripoli, Libya on 12 Sept 2012 to provide anti security at the American Embassy and Regional Affairs Office in Tripoli, Libya for three months.

On 1 April 2014, Major Galvin retired from the Marine Corps and founded Arrowhead Capital developing drive up ATMs in the Kansas City metropolitan area. Additionally, he founded Heroes United, a 100% to program 501 c 3 organization, which provides morale events for the Mid-America Gold Star families to professional and collegiate sporting events, in addition to an annual full-ride university scholarship for a widow or surviving child.

Fred Galvin has graduated from the U.S. Military’s most rigorous infantry, reconnaissance, special operations and special skills courses. Additionally, he completed the Marine Corps Professional Military Education programs including the Amphibious Warfare Course and Command and Staff College. He is also a graduate of the University of Missouri-Kansas City, Henry Bloch School of Management’s Master of Business Administration program.

Upon retirement, Major Galvin’s former Special Operations Task Force was falsely and repeatedly condemned in the national press, international press, as well as by Amnesty International and the International Bar Association regarding the former 2007 false allegations of murdering innocent Afghan women and children. Fred Galvin has been featured during 65 multi-channel media engagements since March 2015 in combination with Congressmen Walter B. Jones (R-NC, bill sponsor), Jeff Fortenberry (R-NE) and Ruben Gallego (D-AZ, former USMC combat veteran of Operation IRAQI FREEDOM) to relieve the threats of domestic Islamic terrorism and end employment discrimination through House Resolution – 21, that would have the Commandant of the Marine Corps issue an official statement that the Marines were “not at fault during the 4 March 2007 ambush.”