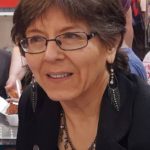 Cynthia Ayers is currently the Deputy to the Executive Director of the congressionally sponsored Task Force on National and Homeland Security. The focus of the task force is on the national security implications of catastrophic infrastructure failure. The mission is to advise Congress on measures that could be taken to mitigate the threat and ensure our country’s ability to survive in a “grid-down” environment.

Ms. Ayers retired from the National Security Agency (NSA) in 2011 with over 38 years of government service, and was subsequently appointed Vice President of EMPact America, a bipartisan, not-for-profit group charged with informing Americans about the potential threat from electromagnetic pulse (EMP – nuclear or solar), and advocating for the reestablishment of the Congressional EMP Commission as well as for legislation to protect the electric grid. In that capacity, she met with a wide variety of individuals, organizations, and members of Congress to explain the threat from and the potential consequences of a catastrophic failure of critical electric infrastructure.

Her intelligence community career included a position as an NSA Representative to the DCI’s Counterterrorism Center, where she worked throughout the attack on the USS Cole and the attacks of 9/11 (2000-2002). Her federal service culminated in an eight-year assignment to the Center for Strategic Leadership as the National Security Agency’s Visiting Professor to the U.S. Army War College (USAWC). While at the USAWC, Professor Ayers taught electives on contemporary threats to national security from an intelligence perspective, and advised students on research concerning counterterrorism, strategic intelligence, cyber warfare, the Middle East and critical infrastructure protection.

Ms. Ayers is on the Board of Governors for Canada’s Mackenzie Institute, a member (and former Vice President) of the Central Pennsylvania Chapter of InfraGard, a member of InfraGard’s EMP Special Interest Group (SIG), a member of the Secure the Grid Coalition, and a cyber consultant to the Strategic Concepts and Doctrine Division within the Center for Strategic Leadership (U.S. Army War College). She also works part-time on a George Mason University project involving the use of Cognitive Agents (Artificial Intelligence) for Intelligence Analysis.

Ms. Ayers recently announced her campaign to run for U.S. Senate for the State of Pennsylvania in 2018.  She has written several published articles on national security issues and is currently working on a book concerning bias within the federal bureaucracies.