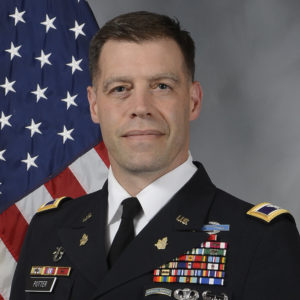 Colonel Joshua Potter is a US Army Officer who has served in several operational assignments in the United States, Europe, and South Western Asia. Upon graduating from West Point in 1993, he served in a variety of Air Defense Artillery, Special Forces, and Civil Affairs assignments.

A decorated officer, COL Potter earned four Bronze Stars, the Purple Heart, two Joint Commendation Medals, the Combat Infantry Badge, the Combat Action Badge, Iraq Campaign Medal with five campaign stars and the Afghanistan Campaign medal with one campaign star for his multiple tours of service in combat in Kosovo, Iraq, and Afghanistan.  He recently returned from his sixth combat tour, where he served as the Director of Strategy and Plans for Special Operations Forces in Iraq, Syria, Jordan, and Kuwait.

Through his military career, COL Potter has visited and worked in 47 countries and 6 U.S. states, lived in 16 homes, deployed 11 times, led over 300 combat patrols, nabbed over 100 insurgents, conducted scores of successful searches and raids, defeated six IEDs (some were dynamic, unfortunately), saved and returned over $93M to the DoD through project close outs in Afghanistan, wrote three books (one was pretty good), contributed authorship in over 20 military doctrinal manuals, earned two Master’s degrees, missed 55% of his children’s birthdays, at one point had an $8,000 price on his head (wife disputes this number as “far too much”), and has been publicly hailed as the Intergalactic Supreme High Commander of All Things Counter Threat Finance (“ISHCATCTF” could not fit on his business card, however). He has endured through multiple firefights, sniper attacks, indirect rocket and mortar attacks, IED strikes and combat NASCAR driving across South West Asia.  He hates Hezbollah and loves kittens.

For more than 24 years, COL Potter has been married to Tracey, a woman of singular compassion, grace, patience, and charm who raises their blessed three children – Damon, Peyton, and Bradyn while he is away.