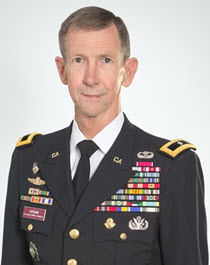 Brigadier General Hagan was born in New Orleans, LA and graduated from John F. Kennedy High School in New Orleans.  His military career began when he graduated from The Citadel, The Military College of South Carolina, with a Bachelor of Science degree in 1971.  He was commissioned a regular officer in the Marine Corps upon graduation.  After completing the Marine Corps Basic School in 1972, he was assigned to 3rd Marine Division in Okinawa and the Republic of Viet Nam, where he served as a Rifle Platoon Commander in 1st Battalion, 4th Marines and 1st Battalion, 9th Marines.  From 1973 to 1976, He served as a Series Commander and the Headquarters Company Commander, 1st Recruit Training Battalion; the Operations and Training Officer and the Headquarters Company Commander in Woman Recruit Training Command; and Aide de Camp to the Commanding General at Marine Corps Recruit Depot, Paris Island, SC.

After his tour in South Carolina, he was assigned to Hawaii, where he served on the Fleet Marine Force Pacific Staff as the Drug and Alcohol Abuse Abatement Officer.  He was then assigned to 1st Marine Brigade as the Commanding Officer, Headquarters Company, 3rd Marines (Rein), and later as the Commanding Officer, Company L, Battalion Landing Team 3/3, which deployed to the North Arabian Sea in support of the Iranian Hostage Crisis.  He next served as the Ground Training Device Officer, Headquarters Marine Corps, Washington, DC from 1980 to 1982.  He was assigned to President Regan’s Joint Service Inaugural Staff as an Aide de Camp.

In 1991, he served as the Operations Officer, 11th Marine Expeditionary Unit (Special Operations Capable) that deployed to Kuwait, and Somalia.  In Somalia, he was reassigned to the Commander, Joint/Combined Task Force Restore Hope as the Naval Forces Liaison Officer.  He returned to Camp Pendleton in 1993 to be the Officer in Charge, Special Operations Training Group, which was responsible for the special operations training of the deploying Marine Expeditionary Units’ Maritime Special Purpose Force.  Following that duty, he was assigned as the Inspector General, 1st Force Service Support Group.  He retired from active duty in 1999.

Following retirement, he served as a Special Agent in the California Bureau of Investigation, California Department of Justice, Sacramento Regional Office, with assignments on the Sexual Predator Apprehension Team; the Major Crime Team; Sacramento Regional Office Range Master; Team Leader Attorney General’s Honor Guard.  He has participated in high profile multi-agency investigations such as the Lacy Peterson homicide investigation.  He served for six years on the Board of Directors of the Association of Special Agents.

BG Hagan was recalled to state active duty in September 2003 as the Exercise Coordinator, Homeland Security, and California Military Department and in July 2004, he assumed the duties of the Director, Homeland Security Directorate.  In October 2005, he was detailed to the Governor’s Office of Homeland Security as the Deputy Director, Training and Exercise Division. He managed the State’s Training and Exercise Programs for California’s 58 counties, 9 major metropolitan areas, and 650,000 emergency responders to prepare them to deal with terrorist attacks involving weapons of mass destruction (WMD) or catastrophic natural disasters.  He directed a multi-disciplinary/multi-agency staff of military and civilian subject matter experts in developing and producing the nationally recognized Governor’s Annual State-wide Exercise Series “Golden Guardian.”

BG Hagan’s tour of State Active Duty was completed on 31 January 2009, he returned to the Bureau of Investigation, and Intelligence, California Department of Justice as a Special Agent assigned to the Major Crimes Team in the Sacramento Regional Office.

On 24 February 2010, he was sworn in as the Chief, Division of Investigations, Department of Consumer Affairs.  The Department of Consumer Affairs consists of more than 40 boards, bureaus, programs, and other entities that license more than 2.4 million practitioners in more than 255 professions.  These licensed professions range from the healing arts (doctors, nurses, pharmacists, etc) to professional services (engineers, contractors, automotive and appliance repair, etc).  He is responsible for directing a staff of sworn law enforcement officers and non-sworn investigators in conducting criminal and administrative investigations and providing law enforcement services to protect the health, safety, and welfare of all California consumers.  In Sept 2010, he returned to the Department of Justice to Headquarters, Division of Law Enforcement, Tactical Support Group, which was responsible for communications support, updating Department policies and procedures, and the Unit Inspection Program.

In April 2012, BG Hagan joined the California Public Utilities Commission as the Director, Safety and Enforcement Division.  General Hagan directs a staff of over 240, located through out the state ensuring the safety of consumers and employees of the gas and electric industry, railroads, light rail, telecommunications, transportation, and house hold goods industry.  He is shifting the corporate culture of the California Public Utilities Commission (CPUC) and the industries they regulate to embrace safety as timeless, universal, and underlying principal and that safety is a tool and an enhancement to accomplishing your mission.  One of his tasks of this culture change is to move from a check the box compliance mentality to risk assessment/risk management model.  He negotiated settlements with several California Utility Companies for $35 to $45 million dollars for safety violations.  He recommend the highest penalty ever assessed to a utility company of $2.25 billion dollars to PG&E for the San Bruno pipeline explosion which killed eight people, with all the money being put into improving the safety of the PG&E pipeline system.  He retired from the CPUC in September 2014.

He holds a Bachelor of Science in Business Administration from The Citadel, The Military College of South Carolina and Masters of Arts in Psychology from Pepperdine University.  He is a graduate of the Marine Corps Amphibious Warfare School and Command and Staff College. He has attended the Harvard Kennedy School of Executive Education.  He holds an Advance Peace Officer Standards and Training (POST) Certificate, a Robert Pressley Institute of Criminal Investigation (ICI) Certificate in Sex Assault Investigation, and California Community College and Secondary School Teaching Certificates.