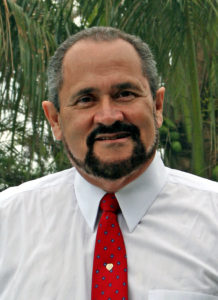 Bernard Sansaricq is by all means a true and genuine product of the United States of America. He came to this country at the young age of 15 years old, and was molded by a very conservative family whose father was an admirer of America. He then attended a Military School in New Jersey with mostly American Officers that had served in World War II. Soon after that Bernard attended Pace University in New York, but his true passion in life was politics.

After 23 years living in the United States and 5 years living in Costa Rica, he returned to Haiti in April 1986, after President Ronald Reagan had sent Duvalier packing after 29 years in power.

Bernard Sansaricq knows the struggle for human rights first hand.  This leader, who eventually rose to become the President of the Senate in Haiti in 1994, saw 13 members of his family killed by the Duvalier regime in 1964.  In August 1987, Sansaricq was almost assassinated by the Haitian Army. His life was spared when friends managed to bring him to safety at Haiti’s Argentine Embassy.

A passionate believer in economic achievement, free enterprises, American human rights and excellence, Bernard Sansaricq, became a U.S. citizen on November 17th, 2006. He ran for U.S. Congress in Florida’s 23rd congressional district in 2010 against the infamous and corrupt Alcee Hastings. He is the proud father of four children, one of which is an officer in the United States Air force.

His goal was to fight for better conditions for small business and to champion human rights.  With regard to the latter, he believes that the United States should work with Haiti to end the horrific abuses of backbreaking child labor and lay the foundation for a stable economy.  A passionate believer in human rights everywhere, Bernard Sansaricq would have also stepped-up pressure on the Castro regime to respect human rights, stand with Israel and India against terror and lead the cause for better economic conditions and fair treatment all across the globe.

Bernard Sansaricq is very experienced on the international stage and has just finished his second book on international affairs. During the first overthrow of Aristide, Sansaricq was in constant contact with the U.S. Ambassador in Haiti: Honorable Alvin Adams, and met with then Congressman and future UN Ambassador and Governor of New Mexico: Bill Richardson, seeking to cement better relations between the United States and the island nation.  Such improved relations would not only benefit Haiti, they would help curb threats against the United States throughout Central and Latin America.

While he was a Senator in Haiti, Bernard Sansaricq was also a regular guest on Good Morning America, the Today Show and Nightline with U.S. Senator Bob Dole in August of 1994, as international attention turned to the island with the imminent armed invasion of then President Bill Clinton.

“I believe that America has been a force for good throughout the world,” We need to support small business, the bedrock of our job market and the lifeblood of many of our families.  We need to give youth a reason to stay in school, by showing them the opportunities that education helps them to achieve.

Had Bill Clinton, not invaded Haiti in September of 1994, there is no doubt that Senator Bernard Sansaricq, would have been elected President of that country in 1995 and would have done so much to improve the economic and political situation of that country, savings millions from starvation, hunger, lodging and education.

As Bernard often says: “The dream goes on and the hope will never die.”  Bernard Sansaricq remains very active in the political scene, nationally and internationally. He intimately knows the inner workings of Haiti, the officials, and the elite families who monopolize the market.

A strong supporter of Candidate Donald J. Trump in 2016; Bernard Sansaricq helped the Trump’s campaign immensely. Sansaricq took apart the Clinton Foundation during almost 100 radio interviews all over the country, with the help of the NRC.

Sansaricq knows the Clinton’s well; he refused to be bribed by Bill Clinton in 1994, offering to make him the richest man in Haiti if he would accept to back up Clinton’s illegal invasion of a small island that was never a threat to the Security of the U.S. A sitting Member of Parliament, Sansaricq was forced to flee into exile, warned by Dominican Republic Joachim Balaguer that Clinton would have him assassinated if he stayed in Haiti, even though he was an elected official.

A couple of Testimonies:

Raymond L. Thurston, U.S Ambassador in Haiti in 1963: …Although now retired from the Foreign Service and several years away from my Haitian adventures, I retain lively sympathies for those Haitians, like Bernard Sansaricq who refuse to bow under Duvalier’s merciless and cynical yoke and aspire to give the Haitian’s people the enlightened leadership they deserve after enduring the abysmal of the Duvalier years.